About a month ago, I was sitting with a good friend of mine talking about the things we miss from back home and he told me that he watched German television every evening for his daily dose of modern German culture. Even though satellite reception in China is nothing new, this still shocked me a bit, so I asked him how he got satellite service in Chengdu.

“Simplest thing in the world. I bought a dish for less than one hundred yuan, and then a box for another 500 yuan and I pay around 500 yuan a year for my service.” 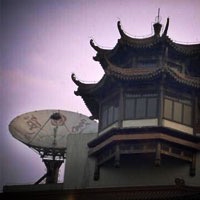 So for less than 1,000 yuan a year (roughly equivalent to $150 dollars), my friend receives all of the channels he wants, more or less, in his home in a Chengdu suburb. Since that morning with him, I am determined to get my own satellite TV in my home so I can watch Skinemax anytime I want. For cheap. When I did a bit of research, I realized that, sure, if I were good with electronics, I could scrounge around the back alleys of the local electronics markets and find everything I would need for my own home entertainment system. But there are a number of websites that have already thought of everything and will come and set up your own system, with all of the channels you might need, for just a little bit more than my friend paid.

Then last week I opened my mailbox and found two small advertisements (images below which details their services; sorry, Chinese only) that offer installation services from 1,500 yuan, depending on how many channels I want. That is one advantage of living in Shanghai: in Chengdu you might have to scrounge around a bit for the parts and basically its a DIY operation, but here in the Hai, there are dozens of companies that will do it for you. Check this place out. Not only do they offer an array of different satellite services (Phillipines-based, Vietnam-based, HK-based) but they have a forum, resource guide and their English is excellent. These guys are pros, and they’ll hook you up in Chengdu as well. Here’s another pretty sophisticated company with an office in Shanghai. They too offer a wide range of services in impeccable English. Not tailored specifically to your needs? No sweat, there is the HBOCN Family Package for those who need Nickolodean along with everything else. 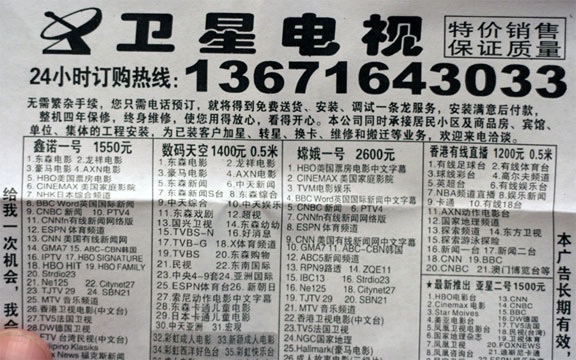 Obviously, the main market for these Shanghai based satellite hustlers consists of expats who aren’t trying to watch re-re-runs of Journey to the West, or some dramatic re-enactment of Chinese bravery in the face of Japanese aggression, or yet another period piece with stolid gong fu guys and whiny women. Standard television sucks, in my opinion, but none as hard as Chinese TV. But all that’s changing. According to studies, the market for satellite TV equipment (dishes and related items) will reach into the billions within two years.

Yeah. And so is prostitution, graft, turning left on a red light and spitting. Owen Fletcher writes about the government’s efforts to curb the gray market in satellite dishes by … introducing regulations … that will force all suppliers to register every dish they sell: “China’s broadcasting regulator this month revealed rules that appeared aimed at checking the spread of both types of satellite TV. The regulations require companies that install satellite equipment to buy permits under a system that would track all dishes sold in the country. They ban satellite receiving equipment on open markets.” But (surprise!): “The new rules may have little effect. The regulator, China’s State Administration of Radio, Film and Television, lacks the power over local government branches to enforce the rules nationwide …”

According to Peter Brown, writing for the Asia Times, China’s recent launch of their own satellite, Zhongxing-9, represents the government’s efforts to spread their message into the deeper, darker recesses of the Chinese hinterland as well as provide a free alternative to Chinese currently paying for service that includes foreign channels.

At the same time, China hopes to beam their TV to millions of households outside of China, stimulating domestic production companies while at the same time continuing to limit foreign penetration into the TV market as best they can. Direct TV in California has already agreed to sell CCTV-4 to the more than 1 million Chinese living in their area. Truly, I don’t care who watches CCTV, as long as it isn’t me. As soon as I found out that satellite TV was about as illegal as anything else is here in China and that at least 40 million people are already enjoying Southpark as opposed to digging their eyeballs out in front of standard Chinese commercials, I made my decision.

Due to the rapid development of Internet and Bandwidth, most people cancelled their cable TV and change to IPTV, they use a Set-Top-Box and use app or apk to watch live tv, and at the same time, they enjoy a bunch of VOD resources. Check this SKY IPTV.